Information Official Utility Bill Pay DOXO is not endorsed by the City of Greenville....

The Greenville Fire Department was created in 1871, after a very destructive fire. On the night of December 12, 1855, a fire took place in the 3rd story of the Buckeye House, located on the southeast corner of Broadway and the Public Square (the old Masonic Temple site), burning it to the ground. The proprietor, J.L. Winner, suffered a total loss. By a coincidence of favorable circumstances, the fire was contained to this one building. After this experience with fire, the purchase of a hand fire pumper and the organization of a firefighters' brigade was discussed. The excitement soon died away and no action was taken, so the matter was dropped. Then, sixteen years later, on the night of April 21,1871, a big fire started in the livery barn of George Stevens (known as the "Flying Dutchman"), just east of the present government building, spreading east to the Blottman Building and Tod & Snyder's stable on East Third Street, scattering fire on the Christian and Lutheran Churches. Loss was estimated between $15,000 - $50,000.

The public was now convinced of the need for adequate fire protection. They appealed to the City Council to organize a fire department and buy the equipment needed. An ordinance was passed by the City Council on May 29,1871, thus creating the Greenville Fire Department. The fire department consisted of a chief, first and second assistants, three fire wardens, and such men as may be needed from time to time. Bonds were issued at this meeting for six thousand dollars, to pay for the expenses of the new department for the years 1872, 1873, and 1874. The first Chief appointed was Reverend D.K. McConnell, of the Christian Church. 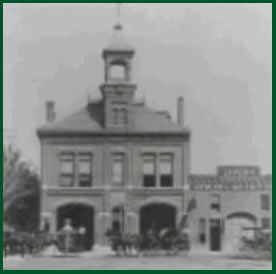 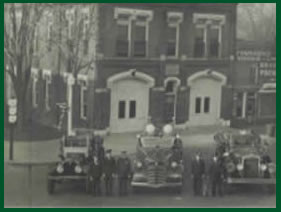 On June 16, 1871, a Silsby steam fire engine, two hose reels, and five-hundred feet of hose was purchased for $7,200. The steamer was entitled "Greenville". This engine was kept in a frame building on Lot 59, West Main Street, until a new City Hall was completed in 1875. A room had been constructed in the north side of that building to house the fire equipment.

On May 21, 1881, an ordinance was passed by City Council to purchase a second Silsby fire engine for $3,450. Due to the growth of the fire department, a more adequate housing facility would have to be provided. The City Council passed an ordinance on February 26,1883, to issue bonds not to exceed seven-thousand dollars, to purchase real estate for the fire department and its equipment. On May 28, 1883, Lot 73, on the northeast corner of Broadway and the Public Square, was purchased for $3,500. The old brick building which stood on this corner was torn down and a useful, convenient, modern two-story fire department building was erected. It had two large exits on the Public Square, stable accommodations for several horses in the rear of the building, and sleeping accommodations above. A second team of horses was also purchased at this time. The Committee of Fire presented a resolution at this time to withdraw $2,100 from the Bridge and Culvert Fund and a $300 loan from the General Fund to purchase a fire alarm telegraph. On March 24,1890, an ordinance was made and passed to purchase the Gamewell Fire Alarm Telegraph System for $2,500. This equipment was reliable and was used until 1988, when it was removed from service and sold at public auction for $2,078.50.